(The Godlike Genius of) Scott Walker

It barely needs noting that there is no-one - not even Satan - who can resist the glory of Scott Walker's self-titled albums from the late 60s. The Walker Brothers' releases beforehand are pretty nifty too. I was blown away by Scott's tunes from 'Nite Flights', which leapt out of the darkness like that thing in my bad dreams, and showed me a whole new Scott (a scary Walker - a Walker brother from another planet). Even when I finally bought 'Tilt', it towered over me, and despite being really hard to get, gave me thrills ('21, 21, 21'). But for some reason, I kept putting 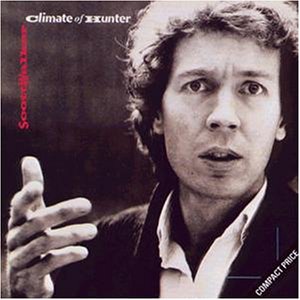 'Climate of Hunter' off. Perhaps it was the rumours of poor '80s production. Perhaps it was caught between the twin-glories of 'Tilt' and 'The Electrician', and so simply could not compete. Perhaps I just knew that a sparkly new remasted edition was on the horizon, and that I should really just wait.

Well, wait I did. And sure enough, a sparkly remastered edition was released, which I bought as soon as I saw it. Even then, however, the mood wasn't right and it sat, unplayed on my shelf for a further three and a half weeks. I do not know what I was thinking, or why I was thinking it. It might be the same reason that 'Au Hasard Balthazar' still sits unwatched on my DVD shelf after about three and a half months, despite years of wishing for it.

Anyway, about a week ago, I finally did it. I played 'Climate of Hunter'. Bloody Hell, the guy is good. Yes, it probably is fair to say that the production is not perfect - and yes, it is also probably fair to say that it is not as great as 'Tilt' or 'The Electrician'. But bloody hell, the guy is good. It does sound very much like it sits between those releases. It is not as operatic as Tilt, nor as much like a fucked up disco as 'Nite Flights', and as such, it probably is not as good. But this is a bit like saying that The White Album is not as good as Revolver or Sgt. Pepper - it is probably true, but it is hardly condemnation either.

As for the sound: heavy slabs of synths play host to Scott's loosely shaped lyrics. The word play is not tight or playful, but every word, every phrase and every phrasing seems forced. I feel like I am being a little over-dramatic here, but it does feel like the Garden of Gethsemane - everything feels like it is being forced into existence. Here is a sample of the lyrics (I do not claim to know what he's on about):

'This is how you disappear
out between midnight

called up
under valleys
of torches
and stars.

as one of their own
you graze with them.'

Various contributors come and go throughout the disc - from Billy Ocean (who performs a duet on the one single from the CD - the appropriately named 'Track Three') and Evan Parker to Mark Knopfler. Somehow, these oddly inappropriate artists are sucked into Scott's universe, and give performances that somehow make the CD a little more tense again. I have waited a long time for this - and for no terribly good reason - but hey, it was worth the wait.
Posted by James MacLaren at 8:31 PM

Sorry, off topic - but I thought you might like to know I went out and bought Wolves yesterday, at least partly on your recommendation (also because they're playing here in Cardiff towards the end of the month and I'm planning on seeing them). I gave it a spin last night - sounds very very promising. On first impression your comments do it justice.