Trying to Remember (Part One of Who-Knows-How-Many)

I don't really want to begin this by getting all philosophical, but I will allow myself this slight indulgence. The philosopher David Hume suggested that what we call personal identity, a sense of unified self, is an illusion. Instead we are mostly a 'bundle of perceptions'. Think about yourself right now - you are perceiving a multitude of things (the screen, words, cold, perhaps even breathing) but there is nothing that could really be understood as your self - an identity holding it all together. Anyway, I say this as a means of introduction and a rationale. When I look back on my teenage years - or almost any years beyond the most recent - all I have a bundle of largely fragmented memories, but nothing that quite holds it together beyond the fact that I have them. There are huge gaps - gaps not only of the mundane, but also of people, events, places.

And this bothers me. I have recently joined a Facebook group populated by people that I was very close to for a couple of years. Names and photographs are appearing and I am struggling to unearth their significance. I feel bad about this. People have done me the service of remembering me. I have not done the same. Not out of malice or disregard (not consciously anyway), but those memories have simply deteriorated. So I thought that I would write what I remember down. Perhaps once I have done so, others, if they are interested and kind enough, might be able to fill in a few of the gaps - do a little excavation work. I am certain that hidden in my mind are the people, events and places that were all so incredibly important to me for a time.

As I set out on this task I am very aware that this will not be very interesting to anyone, perhaps even myself. Maybe one or two people will read it out of sheer boredom. So why do it? I figure that the only way to properly unearth these memories is to approach them systematically. It is only by going into the nooks and crannies of what I do remember, that I will remember more. If I rely on my occasional ruminations then it is unlikely that much will come, and that which does will fade away as soon as it emerges.

Aside from potentially boring people to tears, I want to apologise in advance for all the people that I have forgotten, or have failed to give a proper place to. Should anyone read these and feel slighted, I ask that you prompt me - take me to task. Again, I am confident that it is all in there - all that is needed is the appropriate stimuli.

My teenage years begin properly in the months leading up to 5th July 1986, while I was still 15. I will skip any long introduction to this period at this point. As and when it is required, I may digress, but for the time-being it will suffice to note that my birthday is in October, so at this point I was 15. I grew up in the posh end of Garston, but had lived for a time in and between the ages of 9-11. I went to . My family were quite religious...

If there is a hero of the piece (or villain if you happen to be my Grandmother), that honour goes to Justina Heslop. Through a church youth group in Aigburth, I had met Justina somewhere around 83-84. In that clumsy pre-teenage fashion we had gone out for about six months. For reasons that are utterly lost, and probably worthless even then, we broke up and lost contact. Life went on. Somewhere towards the end of 1985 or beginning or 1986, I realised that I had left something important at Justina's house and I wanted it back. It was a Frisbee and accompanied by Ian Webster, a friend from school, I went to her house to retrieve it. Her mother answered the door, greeted me and invited us in. She called up the stairs to Justina, who stuck her head over the bannisters to see what the matter was. What I saw was a shock of black and white.

In the time since I had seen her last, Justina had become a goth. I did not really know what this was or what it entailed, but it evoked a significant change. She invited us upstairs and we sat in her room for a little while before claiming the Frisbee and moving on. Before we left, however, we spoke about the clutch of records that littered her room. I had been into music since early childhood, but these were bands I did not know at all and I was intrigued. There were albums by Bauhaus, The Cramps, The Cult etc. Justina played me odd tracks by some of these - most notably 'Rose Garden Funeral of Sores' from Bauhaus' 'Press the Eject'.

My own tastes, while nowhere near so refined, were fairly broad and had left me receptive to new things. Of course, I had a general appreciation of the pop music of the period but there was plenty beyond it. Through my childhood, I was a fan of Blondie and New Wave bands in general. Thanks to my uncle, who was at that time a big fan NWBHM, I had been exposed to a variety of metal bands. While he preferred the more technically proficient end of the spectrum, I gravitated towards Black Sabbath and Motorhead. Thanks to my parents, classic 60s and 70s rock and soul were covered. I had recently developed a particular fascination with Jimi Hendrix. Beyond this, I had begun to be aware of music beyond these parameters; I had fallen in love with the aesthetic of Strawberry Switchblade, and, not unrelated, had found myself oddly drawn to 'Swimming Horses' by Siouxsie and the Banshees. Even though I had little notion about what these hairstyles related to, I was intrigued.

So when I heard these records of Justina's, I was hooked. I quickly got back in touch with her again. She kindly arranged for her boyfriend of the time, some older kid called from the Wirral, to do me some tapes. Over the course of the following weeks, the following albums were acquired, either by tape from or by going to the WHSmiths on and seeing what was in the budget pile:

These albums formed the starting point of a new chapter of my life. But the real point of change occurred when Justina rang me a few weeks later to tell me of an upcoming Peter Murphy gig at the . 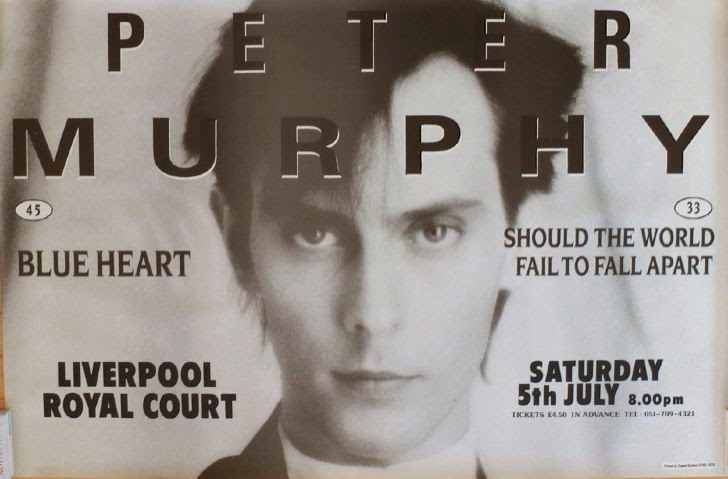 Posted by James MacLaren at 6:26 PM